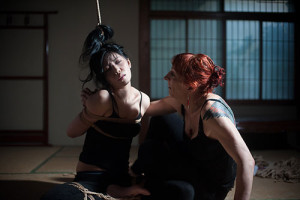 Isabelle publicly joined the Japanese Rope Bondage community at middle age and quickly became involved professionally. She created her school “Kinbaku Dojo” and continuously run over the world, to spread to many her style and way of playing with ropes. She has performed in some of the greatest places in Japan like O Nawa asobi, Jyohya club, Mitsu mitsu, UBU, also in North America, Europe, Australia. Isabelle also work with movie productions and entertainment industry as consultant and artist.

Isabelle’s credo, from Confucius : “Never be tired of learning, or teaching others.”

Professionally she has been Directing and editing for TV commercials since 1975, she also worked for many movie production and advertising agencies as Artistic Director. This makes her to have a solid expertise on image and scenery creation especially for artistic direction.

Raised in south of France, she moved to Paris for her work in early 80’s. At this time she discovered rope bondage when editing for adult film industry.

Her odyssey with art and beauty of Japanese rope bondage started when she embraced her strong desire to live the kink inside her. At her early beginning she was driven by the strong desire to be tied, but as no one in her local 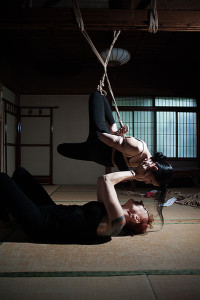 community was offering “traditional style Japanese rope bondage”, she started self bondage to explore the sensuality on her own desire. This is how she has been asked to tie up other peoples at events. Since then, her life has been dedicated to the Japanese way of tying up people for sensual or sexual pleasure, the beauty of Kinbaku semenawa (緊縛責め縄術 tight binding tormenting rope).

When tying up she is looking for exaltation, love, sensuality, power exchange, and also the beauty of all corporal expressions, feelings and sensations. Being there only for the one she has caught in her ropes and emotional web.

-“When I share “moments with ropes” with someone, I feel the power and the desire to make this person more beautiful to my eyes by the full surrender of their will to mine”.

This post will regularly host photos of previous session that have not been selected at the time the series went publicly published. These are mostly photo that will not be allowed on social media.

Such a beautiful performance with Yvette in Erskinville at Sydney Rope Dojo, Australia. Photos by Image Taylor. You may enhance your experiment at listening the soundtrack of the performance when watching these beautiful photos.